One set of choices would lead to one or more "crashes," or bad endings: federal debt default, hyper-inflation, massive and deep economic recession, riots, and chaos.

Is there a way to stop what is unsustainable without the dire consequences? The short answer: Yes. But to get there, we would need to get rid of Obamanomics and adopt a Republican plan. Yes, there is a Republican plan.

You don't have to take my word for it that the budget is unsustainable. Take President Obama's word: "When it comes to health care spending, we are on an unsustainable course that threatens the financial stability of families, businesses, and government itself."

That was also stated clearly by the Congressional Budget Office this June.” The federal budget is on an unsustainable path, primarily because of rapidly rising spending on health care ... the country faces difficult and fundamental trade-offs between limiting the growth of Medicare and Medicaid relative to GDP, accepting a continuing increase in taxes relative to GDP, and reducing other spending relative to GDP ... Moreover, serious fiscal imbalances are not a far-off problem.”

Is this something new that came about because of recent economic troubles? Nope. We've been warned repeatedly. Here is a statement from the General Accounting Office in 2007. “The "Status Quo" is not an option. We face large and growing structural deficits largely due to known demographic trends and rising health care costs. GAO's simulations show that balancing the budget in 2040 could require actions as large as cutting total federal spending by 60% of more, or raising federal taxes to two times today's level.”

Note that in April 2007, when the Comptroller General of the United States made that statement, there was no recession, few financial system worries, and a very manageable federal budget. (Federal spending, the deficit, and the debt held by the public were all below the average of the previous 25 years as a percentage of GDP then. And federal revenues were above that average.

The problem can be visualized with the following graph from the Heritage Foundation (based on Office of Management and Budget data and CBO data).

Federal Spending and Revenue as a Percentage of GDP

So look at the above chart again. Imagine that chart with Defense spending totally eliminated -- set to zero. We would still have a deficit -- last year, today, and from now to infinity. Go ahead and dream of what you could do with all that money going to Defense. Because it is a dream. Eliminate Defense entirely, and you still have deficits as far as the eye can see. In just 2009, Defense spending was less than half the size of the deficit.

Now imagine the "Other" spending, that bulleted list above, totally eliminated. By about 2024 (fourteen years from now), we could eliminate it all and still be running deficits.

By 2040, Medicare, Medicaid, and interest on the debt, all by themselves, will eat up every cent of federal revenue. And that is what you call "unsustainable."

Now look at that graph one more time. What categories of spending are growing? There are really only two categories with significant growth: Medicare/Medicaid and net interest. And the net interest grows only because our debt is growing. In short, net interest is a symptom, not a cause. The cause is, in a word, Medicare. Yes, Obama inherited this mess. He inherited it from Lyndon Baines Johnson.
But instead of addressing this problem head-on, Obama is doubling down on LBJ's mistake. All the health care "reform" measures put forth by Democrats leave the basic structure of Medicare untouched, and in fact, expand on this already bankrupt system. If your intent is anything other than the destruction of both our health care system and government finances, then this is insane.

A sane response to both this real crisis of unsustainable federal budgets and the lesser problem of health care coverage does not require defying the laws of physics. One sane plan, the "Roadmap for America's Future," has been proposed by Paul Ryan (R-WI). The Heritage Foundation's evaluation of this plan is summarized in the chart below. 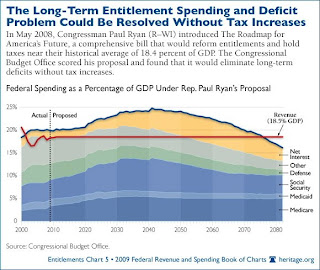 Compare the two charts. Call them Unsustainable and Sustainable, or Insane and Sane. Or call them Democrat and Republican. Any reasonable person looking at the first chart, or listening to the CBO or GAO, or anyone with insight into the federal budget, would not add to the budget, as Obama does year after year, proposal after proposal.

A reasonable person would look at the big budget offenders and see how to throttle them back. The big budget offenders are not earmarks. All discretionary spending, including Defense, has actually been declining over the years as fractions of both total government spending and GDP. A reasonable person would need to concentrate on the entitlements and do something major with them, not just tinker with them, and certainly not expand them. In short, Democrat plans are unsustainable, insane, and unreasonable, and Paul Ryan's plan is sustainable, sane, and reasonable.

Now you might think that the Heritage Foundation has a conservative or Republican bias. But Ryan's plan was also scored by the CBO. Here are the CBO's words.

“The Roadmap would put the federal budget on a sustainable path,
generating an annual budget surplus of about 5 percent of GDP by 2080... real gross national product per person would continue to grow overthe entire 75-year period. The economy would be considerably strongerunder the proposal than it would be under the alternative fiscalscenario. Real gross national product per person would be about 75 percent higher in 2058 under the proposal than under the alternative scenario.”
Posted by My Independent Word at 6:55 AM No comments: